We purchased this 1931 Model A in 2012 or 2013 and loved it! It drove well and smoothly and was a pleasure to own. And you didn’t have to put the windows on it when it started raining, like we did with the 1929 Model A Roadster we also have.

About two weeks after we drove it home, our second son, his wife, and our grandchildren from Tennessee were here visiting and the youngest one wanted to
take a ride in the Model A. So being a good Grandpa, Mike got her into the car and they drove to the filling station to “gas up”. They were very busy, so he
pulled over to the side to wait for a pump to be available. 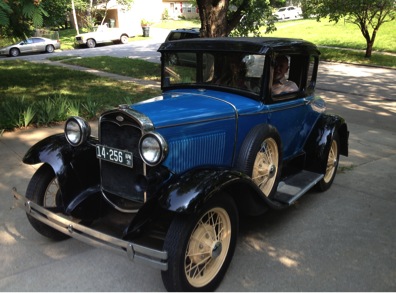 It was a beautiful day and everything was going fine when our granddaughter told Grandpa Mike that she smelled smoke. Sure enough, she did! The engine
had caught fire!

Mike got her out and opened the hood and sprayed it with his extinguisher but it wasn’t enough. A very scared but helpful young man poured water from his
water bottle on it. Someone called the fire department, which was located about 3 blocks away, and we ended up with police cars, 2 fire trucks, and many, many curious persons looking on.

The fire was put out very quickly with little damage, but the Model A had to be towed home. We contacted the friend from whom we had just purchased the
Model A and he came and towed it to his home and repaired all the damage and it actually looked better under the hood than it did when we bought it.

We enjoyed this Model A (with an oogah horn that actually worked) for a couple of years but then illness interrupted our good life and Mike passed away last
September. We advertised the car for sale and within a week, a gentleman from Nebraska came and bought it. He has a 1930 and a 1932 Model A and was looking for the 1931 and a 1929. Since he could only afford one car, he chose our 1931.

It was sad to see it drive away, but it’s going to a good home and this gentleman will take good care of it. Our memories of this automobile are joyful and the
car’s going to be happy in it’s new home. What more could we ask?