In the early 1900s, an electric car like the Milburn Light Electric was the perfect vehicle for the modern woman on the go.  Unlike gasoline-powered autos, it did not need to be cranked to start, marking it easier to operate.  The two levers just inside the door controlled steering and accelerating.  Pedals on the floor operated the brake and the clutch.  The car’s maximum speed was about 25 mph, and it could travel 60-90 miles before the batteries, housed in compartments at the front and rear of the car, need to be recharged.  Much like today, people had charging stations in their garages and recharged the batteries overnight.

The Milburn was donated to the Douglas Country Historical Society in the 1930s by its only owner, Eleanor Henley, the wife of prominent businessman Albert Henley. The Lawrence Chapter of the Antique Automobile Club of America, led by Ralph Hoffman, restored the car in 1973.  In 1975, Nancy Hambleton, the first woman mayor of Lawrence, drove the car to the front door, and it was installed at the newly opened Watkins Museum.  It was the first major acquisition by the Douglas County Historical Society to be housed in the new museum.

In a letter donated with the car, Mrs. Henley described her adventures behind the wheel driving her friends and people in need around 1920s Lawrence.  She tells of a close call with a neighbor’s dog and brushes with the back wall of her garage.  Reportedly, her husband paid the city to widen the 700 block of Louisiana Street, where their home was located, so she could make a U-turn whenever she wanted. 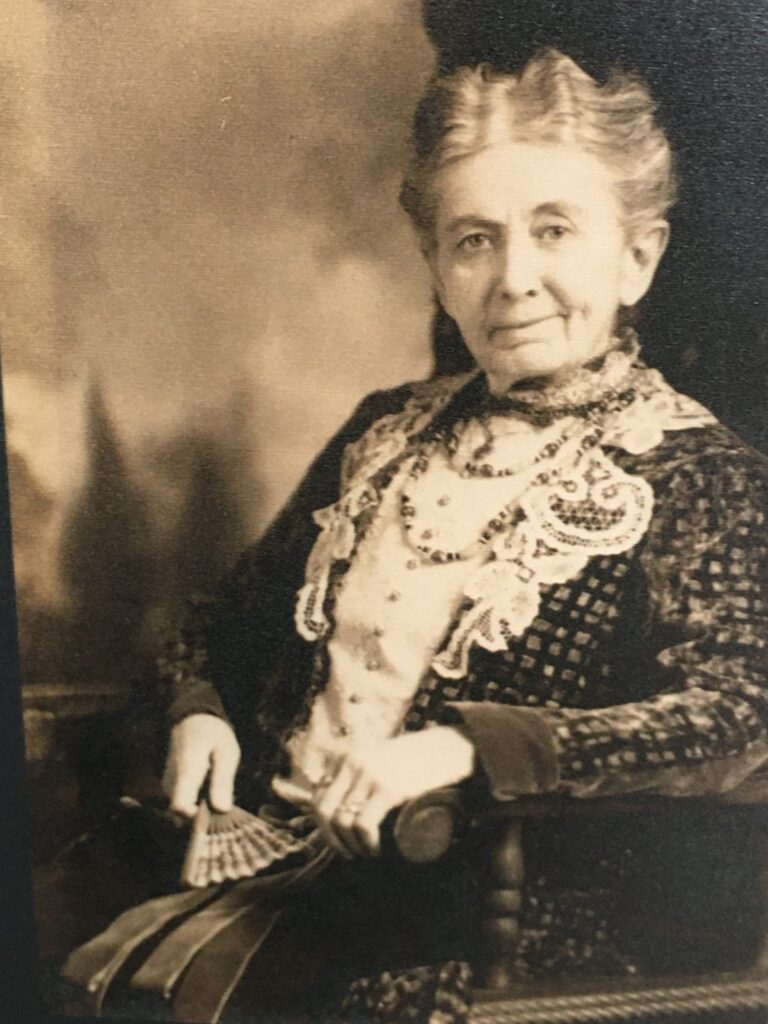 Eleanor Henley moved to Lawrence in 1878 with her husband Albert, who established one of the first barbed wire factories west of the Mississippi.  Eleanor and Albert raised three sons: Walter, who died of typhoid fever at age nine, Roy, and Warren.

Eleanor was a community leader known for her generosity, hospitality and sense of humor.  Quaker values of equality and human rights guided her throughout her life.  She served on the Lawrence Public Library board of trustees for over 30 years and helped establish the children’s reading room.  She led the creation of Robinson Park and helped design the new Presbyterian Church at the corner of 9th and Vermont in 1899.  As part of the Lawrence Civic Improvement Association, Eleanor addressed issues of poverty, adequate housing and public health, and gave the largest donation to found the original Lawrence Memorial Hospital at 3rd and Maine Streets in 1921.

Eleanor assisted with the design of the Henley home at 713 Louisiana Street, where she loved to entertain.  Eleanor and Albert traveled widely in Europe and around the world, and she created a special gallery in their home to display the art they purchased.  The Henley’s were often on the cutting edge of new technology.  In 1902, they bought one of three open-carriage steam cars in Lawrence.  In 1916, they purchased a Milburn Roadster, the first electric car in Lawrence, and later, likely 1921, bought the Milburn Brougham displayed in the Watkins Museum.